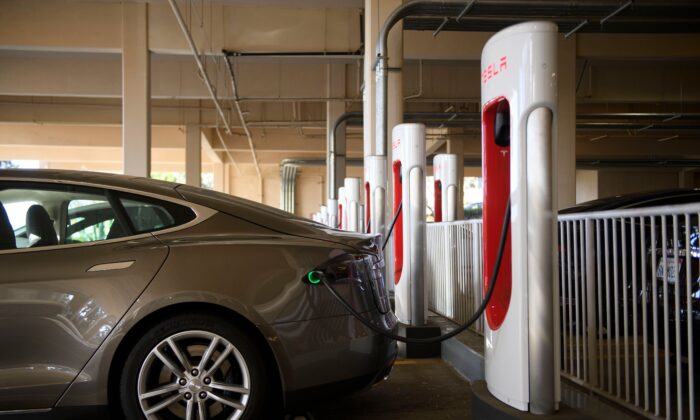 Overview of All Proposed Spending in Biden's Infrastructure Plan

From traditional projects like roads and bridges to climate initiatives and programs outside the traditional infrastructure scope, President Joe Biden's plan is an ambitious package he will try to pass through a nearly evenly split Congress in the coming months.

Biden said the plan will invest about $2 trillion this decade. He dubbed his proposal the "American Jobs Plan," which marks the first part of a two-part economic plan. Some programs and investments did not include a specific price tag. They are added at the end.

$621 billion in transportation infrastructure and resilience.

• $20 billion for a new program that will reconnect neighborhoods cut off by historic investments and ensure new projects “increase opportunity, advance racial equity and environmental justice, and promote affordable access.”

• $25 billion for a dedicated fund to support ambitious projects that have tangible benefits to the regional or national economy but are too large or complex for existing funding programs.

• Electrify at least 20 percent of the yellow school bus fleet through a new Clean Buses for Kids program.

$100 Billion to re-energize America's power infrastructure to form a more resilient grid that will place the United States “on the path to achieving 100 percent carbon-free electricity by 2035."

• This will include a $10 billion investment to “put a new, diverse generation of Americans Lo Work conserving our public lands and waters ... and advancing environmental justice through a new Civilian Climate Corps"

$213 billion to produce, preserve, and retrofit more than two million affordable and sustainable places to live.

$100 billion to upgrade and build new public schools through $50 billion in direct grants and an additional $50 billion leveraged through bonds.

$12 billion in community college infrastructure. States will be responsible for using the dollars to address both existing physical and technological infrastructure needs.

$25 billion to help upgrade child care facilities and increase the supply of child care in areas that need it most.

$18 billion for the modernization of Veterans Affairs hospitals and clinics.

$10 billion in the modernization, sustainability, and resilience of federal buildings,

$400 billion toward expanding access to quality, affordable home- or community-based care for aging relatives and people with disabilities.

$180 billion investment in R&D and the technologies of the future:

• Includes $35 billion in the full range of solutions needed to achieve technology breakthroughs that address the climate crisis and position America as the global leader in clean energy technology and clean energy jobs. This includes launching ARPA-C to develop new methods for reducing emissions and building climate resilience, as well as expanding across-the-board funding for climate research.

• $50 billion to create a new office at the Department of Commerce dedicated to monitoring domestic industrial capacity and funding investments to support production of critical goods.

• $50 billion in semiconductor manufacturing and research, as called for in the bipartisan CHIPS Act. $30 billion over 4 years to create U.S. jobs and prevent the severe job losses caused by pandemics through major new investments in medical countermeasures manufacturing; research and development; and related bio preparedness and biosecurity.

• $100 billion in proven workforce development programs targeted at underserved groups and getting students on paths to careers before they graduate from high school.

• $5 billion over eight years in support of evidence-based community violence prevention programs. Biden is calling on Congress to invest in job training for formerly incarcerated individuals and justice-involved youth and in improving public safety.

Some of the programs or proposals that don't involve money, or did not have a specific funding amount:

– Calling on Congress to tackle long-term unemployment and underemployment through a new subsidized jobs program.

- Calling on Congress to eliminate sub-minimum wage provisions in section 14(c) of the Fair Labor Standards Act and expand access to competitive, integrated employment opportunities and fair wages for workers with disabilities.

- Calling on Congress to ensure all workers have a free and fair choice to join a union by passing the Protecting the Right to Organize (PRO) Act, and guarantee union and bargaining rights for public service workers.

- Calling on Congress to provide the federal government with the tools it needs to ensure employers are providing workers with good jobs—including jobs with fair and equal pay, safe and healthy workplaces, and workplaces free from racial, gender, and other forms of discrimination and harassment.

– Biden is calling on Congress to take immediate steps to spur the construction and rehabilitation of homes for underserved communities.

- Calling on Congress to pass the Neighborhood Homes Investment Act, which calls for the creation of a new federal tax credit that will produce new equity investment dollars for the development and renovation of 1-4 family housing in distressed urban, suburban, and rural neighborhoods.

- Calling on Congress to quadruple support for the Manufacturing Extensions Partnership-increasing the involvement of minority-owned and rurally-located small-and-medium-sized enterprises in technological advancement.

– Calling on Congress to ensure that new jobs created in clean energy, manufacturing, and infrastructure are open and accessible to women and people of color.

- Calling on Congress to invest in job training for formerly incarcerated individuals and justice-involved youth and in improving public safety.

– The President's plan will invest in vulnerable communities through a range of programs, including the Federal Emergency Management Agency's Building Resilient Infrastructure and Communities program, the Department of Housing and Urban Development's Community Development Block Grant program, new initiatives at the Department of Transportation, a bipartisan tax credit to provide incentives to low- and middle-income families and to small businesses to invest in disaster resilience, and transition and relocation assistance to support community led transitions for the most vulnerable tribal communities. Follow Bowen on Twitter: @BowenXiao_