I Know Why I am so Healthy

I am almost tired of being asked why I look so healthy now. I just answer by saying Tachyonized products gave me back my dog, who was close to euthanasia due to chronic arthritic pain; my 78-year-old mother, who has been fading away from multiple health problems; and last but not least, myself! I have so much energy now that other people can feel it across the room! 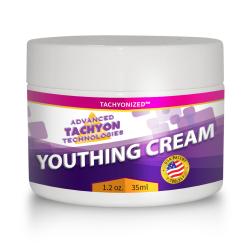 Tachyon is fabulous! I recently fractured my ankle. From past experiences of injuring the same ankle and using the wisdom of Western medicine to cast and immobilize and then wait and wait (six to eight weeks), then go through physical therapy and still have an ankle that is weak. Instead, I decided to use alternative ways of healing my ankle. Thanks to the Tachyonized Cells (that I taped on each side) my ankle is growing stronger by the day and it’s only been two weeks. When I remove the Tachyonized Beads to rest my foot/ankle, within 20 minutes, the entire foot starts to swell. I put the Tachyonized Beads back on my ankle and the swelling goes away!
I highly recommend Tachyonized products for any injury. It speeds up the healing time and adds strength to the injured area. Thank you!

Our cockatiel’s mate died two years ago. He has been completely quiet since then. A few weeks ago, I noticed that his eyes were stuck shut. Every morning, I got some warm water and a cloth and opened them up for him. Luckily I remembered our Tachyonized Chakra Balancing Kit and placed the 24mm sapphire Tachyonized Cell on his cage directly over his favorite perch. The next morning he woke us up singing! His eyes were opened wide!
A few days later my wife still could not believe that the Tachyonized Cell worked at all. She took it off. Wouldn’t you know that his eyes were shut and running when I woke up the next morning, and he wouldn’t make a sound. I quickly cleaned his eyes and returned the Tachyonized Cell to its original place. Now, his eyes are fine again and he sings often. Even if someone barely jiggles the front door knob, he makes noise like a watch bird!

In 1978, I was diagnosed with a pre-cancerous condition, a thyroid nodule. Surgery was performed on the benign tumor which was wrapped around my thyroid gland. I was left with about half of the gland. For the next 18 years, I took three grains of synthetic thyroid every day. In 1992, I began using Tachyonized products extensively. I made it a point to wear a Tachyonized Silk Scarf over my scar as much as possible, and rubbing the Tachyonized Massage Oil on my throat, as well as using Tachyonized Water daily. Two years ago, I decided that the thyroid hormone was making me too nervous. On a lark, I began breaking them in half, cutting the dosage to 1.5 grains. In the beginning of 1998, I just did not want to take them anymore.
I went and had my thyroid uptake done, and low and behold, a perfectly normal amount of thyroid is now being produced!"

I would like to take this time to thank you for all that you and your company did for the rescue workers at ground zero (911) over the past 2 months. I have been able to give of myself for 12 hour shifts thanks to your products. After about 10 hours of working, my forearms would start to cramp preventing me from continuing. I would then pull out my bottle of Tachyonized Panther Juice and put it on. Without stopping the cramps would leave and I was able to continue my full shift. (I never stopped to eat thanks to the Tachyonized Blue-Green Algae I was taking.) After a couple of days of doing this the guys started to take notice and wanted to know what I was putting on. I told them but kept my bottle tucked away in my pocket. That is when I called and asked for your help. Thanks to you and your company our 5 therapists were able to help hundreds of more men in the short time we had. The lines were endless with firefighter and officers hurting in more ways than I can tell you. But one thing I can say for sure is I consider myself to be blessed with all the thank you’s, hugs, kisses and tears that fell upon me and for this I would not have been able to accomplish with your help. This event has changed my whole life forever not in that it was good or bad, but that in the presence of such massive destruction and death all around us, there was an over whelming presence of LOVE . Thank you again and again. I am proud and honored to part of this wonderful company. 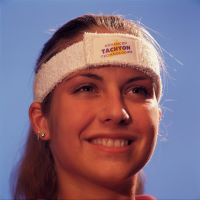 I received my first Tachyonized products 3 weeks ago and started to witness miracles. Three days ago my mom chopped a bit of her index finger tip off when she prepared dinner for a family gathering during Chinese New Year. When I arrived at my parents' house, she just came back from the Emergency Ward. She was still scared from the accident and talked about the incident excitingly. I took off my Tachyonized Headband and wrapped it around her hand to try to relieve her pain. I realized that she calmed down straight away so I took off my Tachyonized Scarf and wrapped it around her neck. She calmed down a bit more and could talk about her experience in the hospital peacefully. The doctor told her that it would take her about 3 weeks for her wound to heal. She is not supposed to dip her finger into water until it recovers completely.

During the time when my mom was in the hospital, my father did all the washing and preparation for the dinner. He was very stressful and began to worry about the workload in the following weeks when my mom is having her 'sick leave'. Noticing that, my husband took off his Tachyonized Headband and put it on my father's neck. He also calmed down straight away. He sat down to chat with us for half an hour while we were waiting for my brother's family to arrive. It was the first time ever in my whole life when I could have such a peaceful conversation with my father. He used to move around like a headless chicken to check things out and complain about my brother's lateness. On that evening, he never left his seat during the whole time when we chatted. He talked about the hardship when he was a child and did not get angry at all. I could feel the energy flow between us when I was listening. It had never been so peaceful and enjoyable before. I left my Tachyonized Scarf and Tachyonized Headband with my parents when I went home. Two days later, when I saw my mom again. She told me the Tachyonized Scarf had also relieved her long standing eyestrain a bit. Thank you for David and Tachyon for the miracles. May peace with every one always!

My name is Sonja Aldrian, and I work in a general medical practice in Graz, Austria, a very old and beautiful city that has the largest original town center in Europe. I live in Lassnitzhoehe, a small "Spa" town only 20 kilometers from Graz, where I see patients in my private practice as a Tachyon Practitioner.

In the medical office where I work, I use my Tachyonized tools to treat many of the spine, joint and arthritis patients who come to us with pain. In October of this year I began making reports on my patient’s progress, so I could accurately share the results with others. My patients assist my research by filling out a treatment form that I have designed specifically for this purpose, and they have given me permission to publish their medical history and their experience with Tachyon treatments. Here’s the story of one of my patients, Mrs. Christine K, who was born in 1925, lives in Graz, AU, and suffered for a decade with acute hip pain. 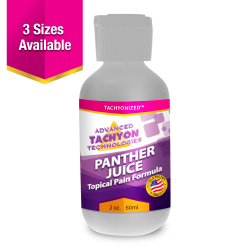 Mrs. Christine K. had surgery on her right hip in 1990 because of severe arthritis pain. A year after her hip surgery she began experiencing pain again, which became progressively worse over the years. By December 2000, the pain was so extreme it restricted her ability to walk, requiring her to use crutches at all times. Traditional medicine had not provided her with any significant improvements or relief.
Before Christine’s first treatment with me, her pain radiated from her lower spine to the right hip, and down her right leg to the knee and ankle. I began treating Christine in the lumbar vertebra area by applying Tachyonized Panther Juice and using my Tachyonized™ TLC bars. To her surprise, the pain in her lower back and hip was completely gone after just one 1½ hr. treatment, without experiencing any obvious detoxification reactions. The pain that remained, although significant, was now isolated from her right knee, down to her ankle.

I continued treating Christine by placing 8mm Tachyonized Cells on the acupuncture points in the hollow of her knee, and again using my Tachyonized TLC bars, until all pain subsided. After ten treatments, over a period of two weeks, Christine was completely pain free, and she remains so after several months.

I had similar results a year ago with a patient, Mrs. Anna P., born in 1926 in Graz. She suffered with significantly swollen and very painful arthritis in her right and left knees. Her condition was present for four years prior to her referral to me. After Mrs. Anna P’s first treatment with Tachyon, she felt a 20% improvement, however, on the following day painful detoxification symptoms appeared. She continued her treatments with me, in spite of the detox reactions, and has been completely pain free since March 2001. She contributes much of her wellbeing to Tachyonized Panther Juice and Tachyonized Blue-Green Algae.