It is possible to protect yourself and your loved ones from the EMFs produced in your home and/or workplace. In fact, you can do more than simply protect your family through the use of Tachyonized Silica Disks. Studies demonstrate and experts report that these tools actually turn hazardous EMFs into beneficial energy for the body. The Tachyonized Silica Disks are available worldwide and have proven the wisest choice for EMF protection.

The discovery of Free Energy and its astonishing potential began with the revolutionary inventions of Nikola Tesla (1856-1943). In 1931, Tesla’s "energy converter" powered a Pierce Arrow (a very heavy and luxurious motor car) up to speeds of 80 miles per hour for extended periods of time. Tesla had invented an alternative to AC generators. The problems resulting from the use of fossil fuels might have been solved as early as the 1930s had the political and business climates been receptive. Was Tesla actually tapping Tachyon Energy? We may never know.

Another pioneer in Free Energy research was Dr. T. Henry Moray. Dr. Moray succeeded in developing a converter that weighed only 28 kilograms and had a power capacity of 50 kilowatts. Upon presenting his invention to the U.S. Patent Office, it was confirmed that the converter functioned perfectly and generated 50 kilowatts of power with no visible energy source. However, since the energy source was invisible and untraceable, the application for patent was denied. This story may sound incredibly close-minded and short-sighted, but it actually happened. Like Tesla before him, Moray was stopped by powerful political and economical forces. Humans and EMFs
Human beings and all other living creatures have their own electromagnetic energy balance. Since our first moments on Earth, we have encountered external EMFs as part of the Energetic Continuum. The planet is naturally webbed with simple EMFs that are interconnected with solar activities such as solar flares and atmospheric events such as lightning. The Earth itself has an iron core that generates a halo of electromagnetic energy, reaching far beyond our atmosphere. All life on Earth has adapted to and existed in this natural electromagnetic environment for millions of years.

But in the last century, we have radically altered our environment. We have saturated the planet with powerful human-made EMFs, the likes of which have never before been known on Earth. These human-made fields have a different wave form, coherence, and frequency than natural EMFs, and their effects on living biological systems are only just beginning to be understood.

Source of Concern
Magnetic fields do penetrate biological organisms. The fields that appear to be of most concern are those that are very strong, near the body, or of high frequency.
Strong fields are generated by transformers in electronic equipment, all motors, and wires carrying high current. The largest fields in the home are usually from the microwave oven, computers and televisions. Hair dryers, clocks and refrigerator motors can also be a big problem if near the body for long periods of time. Small fields near the body that can radiate magnetic fields and cause problems are those from electric blankets, heating pads, and laptop computers. High frequency EMFs are caused by dimmer switches, airline or automobile power systems, cellular phones, fluorescent lights, and many others.

The Studies Reveal The Health Hazards
Countless studies have revealed the health hazards associated with electromagnetic fields (EMFs). These fields pervade our environment and have been implicated as a causative factor in countless health disorders, including childhood leukemia and fetal miscarriages. Reports began with the ground-breaking study conducted in 1979, at the University of Colorado, by epidemiologist, Nancy Werthheimer, Ph.D. Dr. Werthheimer established a firm connection between low-voltage power distribution lines in residential neighborhoods and increased incidence of childhood leukemia.

In 1990, The American Journal of Epidemiology reported two studies regarding the use of electric blankets. One "revealed a quadrupling in the risk of brain tumors among children whose mothers slept under electric blankets during the first trimester of pregnancy." The other indicated that children who used electric blankets were more likely to develop cancer. Findings also show that cancer is not the only ailment that can disrupt immune system function, modify brain waves, and cause other serious abnormalities in physical function and formation.

Research sponsored by northern California's Kaiser Permanente, the largest health maintenance organization in the United States, shows that women who work more than 20 hours per week at video display terminals (VDTs) have more health problems and nearly twice as many miscarriages as women working less time in front of computers. Babies born of pregnant women who work longer hours in front of VDTs also seem to have more birth defects and fetal abnormalities. 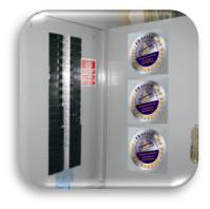 In early 1990, the EPA recommended that extremely low-frequency EMFs be classified as "a probable human carcinogen." Because of political pressure, they quickly retracted this statement in favor of the more benign announcement that: "research shows a consistent pattern of response which suggests, but does not prove, a causal link between extremely low-frequency electromagnetic fields and cancer."

Human-made EMFs have a chaotic energy and different frequency than natural EMFs, and can disrupt or distort organic energy patterns. It is precisely this ability to distort human energy patterns that causes artificial EMFs to be hazardous. Human-made EMFs may cause cancer and present other grave dangers to human health.

Don't Panic!
It is possible to protect yourself and your loved ones from the EMFs produced in your home and/or workplace. In fact, you can do more than simply protect your family through the use of Tachyonized Silica Disks. Studies demonstrate and experts report that these tools actually turn hazardous EMFs into beneficial energy for the body. The Tachyonized Silica Disks are available worldwide and have proven the wisest choice for EMF protection.

Research proves Tachyonized™ Silica Disks will protect you and your family!
Tachyonized Silica Disks were developed to protect you and your family! Their use in eradicating the negative effects of EMFs has become the standard worldwide. Simply put, these are the best tools on the planet to transform the negative effects of EMFs into positive, life-enhancing energy! You know the problem, now you know the solution. Install Tachyonized Silica Disks and you will feel the difference, guaranteed!

How To Use Tachyonized™ Silica Disks