Are Computers Making Us Sick? (The Fruit Fly Study)

ELF and EMF Effects on Humans and their biological system 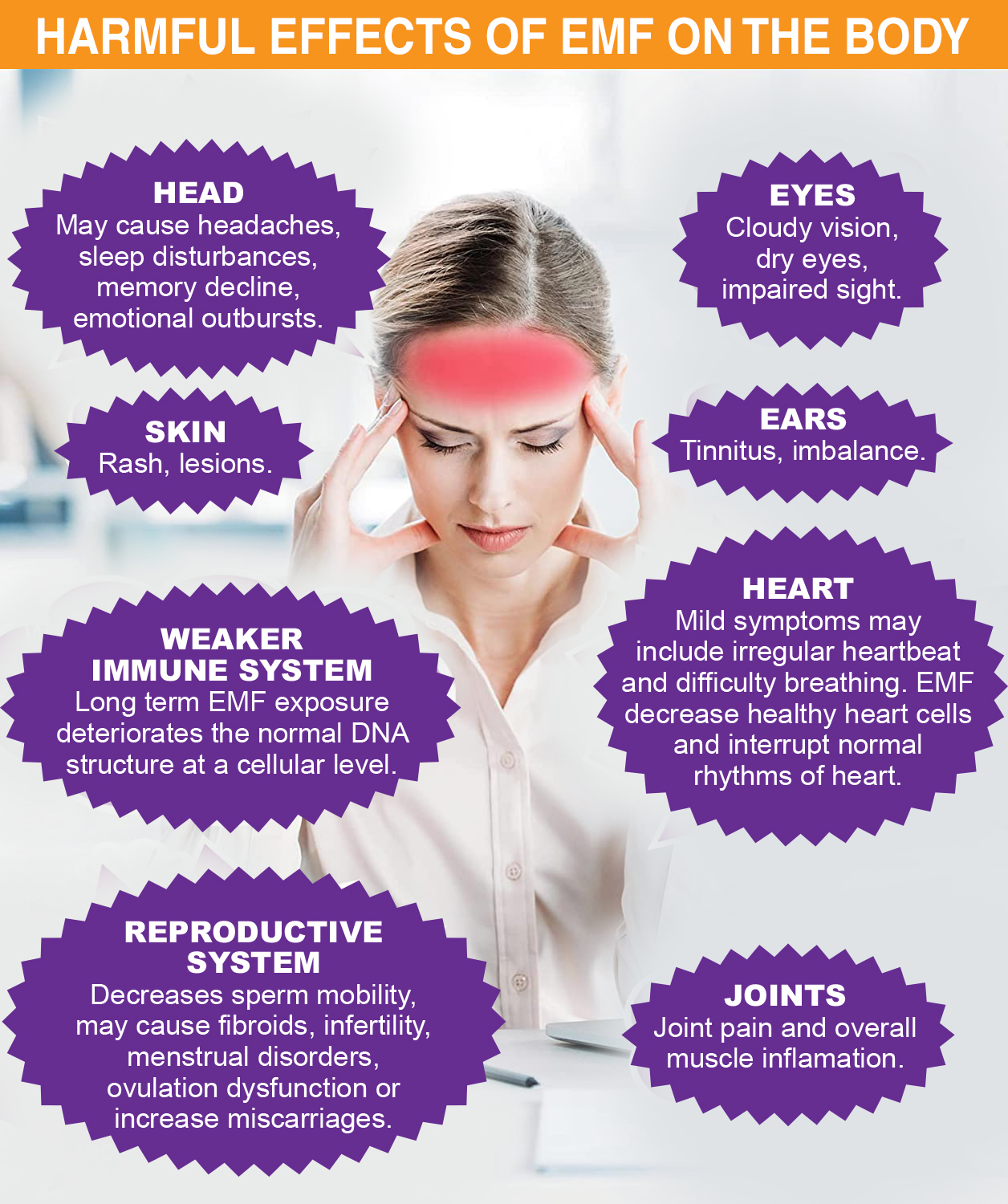 Computer ELF (extremely low frequency) and EMF (electromagnetic frequency) emissions have been implied in a multitude of health issues. The simple fact is that it is unlikely anyone will be able to unanimously prove a solid connection between disease and ELFs or EMFs. The fundamental reason for this is found in the published papers by David Wagner, Professor of Transformational Science, UISCA.
His clear outline demonstrating how SOEFs (Subtle Organizing Energy Fields explained) are depleted and destroyed by bifurcating ELFs and EMFs penetrates to the very core of the issue. The symptoms and imbalances will always be different from person to person depending on the biological constitution of their interconnected systems or the weakness of the SOEFs at the time of depletion.

The key is to stop the EMFs and ELFs that are emitted by man-made sources, such as CRT (cathode ray tube) computer monitors, from creating bifurcations in the SOEFs and thereby stop the depletion and destruction of biological SOEFs. The following research shows how the depletion and destruction of a fruit fly’s SOEFs leads to mutation and sterility on a large scale. In addition, Tachyonized materials are clearly shown to represent a viable solution for individuals to protect themselves.

Many people have heard of the comprehensive studies that report the adverse effects that ELFs and EMFs have on our health. Anyone who sits in front of a computer screen can feel the draining effects of these devices. Interestingly enough, for every report that proves our health is being negatively affected by ELFs and EMFs, there is another report which rejects the notion that ELFs and EMFs have any negative influence on us at all.
It does not matter that the Environmental Protection Agency (EPA), in a preliminary report, stated that ELFs "are a probable human carcinogen." Why? Because corporate America could never admit to the problem without being sued by every man and woman who rightly claimed to have initially developed cancer while working in front of a personal computer. The best we can do is to try and find a way to protect ourselves from electromagnetic radiation.

One way would be to move into a house without AC electricity; somewhere in the unspoiled mountains. This, of course, is not practical for most people. In an attempt to come up with a solution to this problem, a study was conducted to measure the effects that EMFs and ELFs have on fruit flies. Fruit flies were chosen because they have been vital to the academic investigation and understanding of genetics by scientists throughout the modern world. Under the right conditions, it takes only 8-10 days for an egg to develop into a mature adult. This allows for many generations to be studied in a relativity short period of time.

Adult fruit flies are very small insects about 1/8-inch long (3mm). Fruit flies are weak fliers. The thorax is tan and the abdomen is gray underneath and black on top. A feathery bristle is on the antenna, and a distinguishing feature is their red eyes.

Habitat:
At the end of the summer season, homeowners often encounter fruit flies in and about their kitchens and near garbage storage areas. They are generally found near decaying vegetation and overripe fruit. These pesky insects are often found in the kitchen, especially when vegetable or fruit materials are present after major home canning efforts.

Life cycle:
Female fruit flies lay their eggs on the surface of rotting fruit. These eggs hatch into larvae, which molt twice before becoming full-grown. Fruit fly larvae feed on the yeast organisms and fungi growing in the ripe fruit and vegetable materials, and through their feeding efforts, they soon turn their food into a semi-liquid mess. When the full-grown larvae are ready to pupate, they leave the rotten fruit for drier areas, usually to the sides of the garbage can. The precious time needed to complete one life cycle is largely dependent on the temperature of the growth medium and surrounding air. At 64 degrees Fahrenheit, it takes 18-20 days for growth from the egg stage to maturity; while at 77 degrees Fahrenheit, only 8-10 days are required to complete the stages of ongoing development. 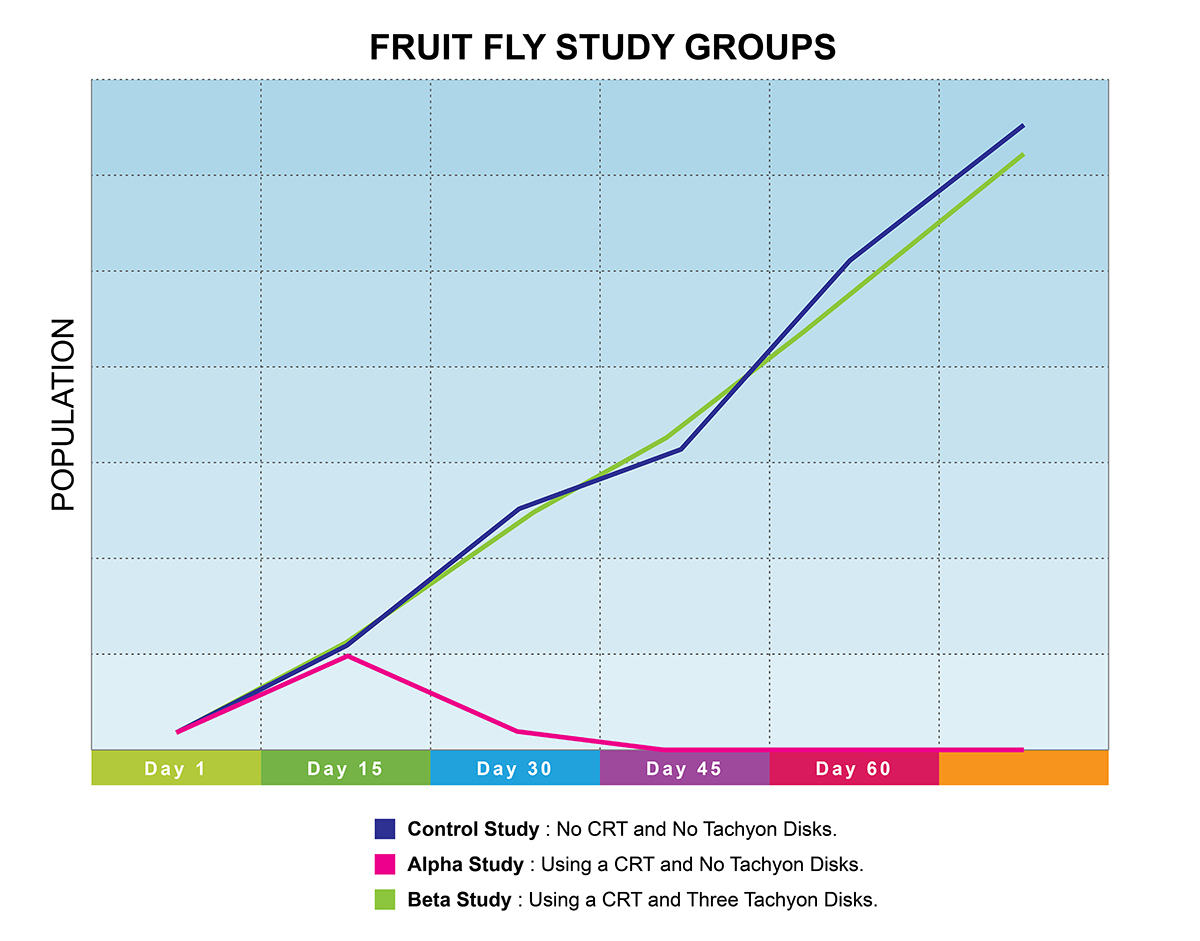 Fruit flies were acquired from a reputable organic fruit dealer. An open-air, screen-covered test site was set up and the environment was moderated using a heating pad. A temperature between 72 and 80 degrees Fahrenheit was maintained. The larvae used in the control study were grown on an organic peach. New organic, pesticide-free fruit was introduced every ten days. The study clearly demonstrated an increasing density in the fly population by the 13th day. Normal propagation was observed for an additional 47 days making the complete length of the control study 60 days.

Two new test sights were constructed utilizing the same dimensions and materials as the control study site and were maintained at a constant temperature between 72 and 80 degrees Fahrenheit. Adult fruit flies from the control study and new peaches were introduced into both new sites. In order to truly test the effects of EMFs and ELFs on the fly population and propagation, a common computer screen referred to as a CRT (cathode ray tube) was used. Each site received identical CRTs, and the flies were placed less than an inch away from the screen in both sites. The CRTs were then turned on and left on, broadcasting a strong EMF and ELF field verified with a Gauss meter.

The fruit flies seemed to propagate normally for the first three generations. Then, at about day 36, many of the new adult fruit flies started developing deformities, and the overall population was smaller. In the next two sets of new adults, there were fewer normal flies and a drastically reduced local population. By day 52, the entire experiment was completed. All of the flies had either stopped propagating or were unable to propagate because of mutation.
The conclusion for test site Alpha was that the effects of the ELFs and EMFs caused the mutations and, within five generations, the end of the fly population. This data supports a report by Kaiser Permanente which firmly claimed that pregnant women who spent more than six hours per day in front of a computer screen had twice the frequency of miscarriages. Listed below are some of the deformities observed.

Short-Winged Flies:
These flies had such short wings that they could not fly. It is believed that they now have a defect in their "vestigial gene", on the second chromosome.

Curly-Winged Flies:
A couple of the flies seemed to have curled up wings. This is considered to be the result of the "curly gene", which is on the second chromosome.

Yellowish Flies:
Several of the new adults seemed to be much more yellow than the rest of the population. It is believed that these flies have a defect in their "yellow gene", which is on the X chromosome. Since the yellow gene is needed to produce a fly’s normal black pigment, these mutant flies should not be able to reproduce this pigment.

White-Eyed Flies:
One fly was noted with white eyes. This indicates there is a defect in its "white gene", which normally produces the red pigment in the eyes.

At this testing site, Tachyonized Silica Disks were installed over the breaker box which provided power to the CRT. This study was uneventful. There were no visible signs of mutations or lack of propagation. By the end of the 60 days the population was at least equal to that of the control study group in which no CRTs were placed next to the habitat.

The Fly Lab study took over five months to complete. The results are quite obvious and enlightening. The ELFs and EMFs from the CRT in the Alpha Study with no Tachyonized Silica Disks to mediate their effects proved deadly! Simply put, fruit flies cannot survive in a strong ELF and EMF field. The only difference in the Beta Study was the Tachyonized™ Silica Disks mounted in the breaker panel that powered the CRT.
The results of the Beta Study clearly demonstrate that Tachyonized Silica Disks can protect you, your family and your loved ones from the harmful effects of ELFs and EMFs.