The current study sought to assess the biological effects and the potentially deleterious health outcomes associated with exposure to electromagnetic fields. By conducting a comprehensive review of the published scholarly literature, a synthesis of the findings linking EMF/ELF exposure to an array of biological effects and negative health outcomes was compiled. Furthermore, the source, nature, and implications of the scholarly and governmental dispute surrounding this issue were analyzed.

EMFs and their Causal Correlation to an Emerging Health Epidemic 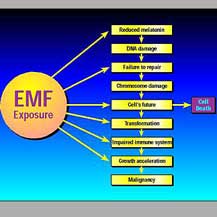 Introduction
Clearly the issue of the health outcomes associated with exposure to electromagnetic fields is at the center of a contentious debate. Reflecting the dimensions of this debate, the scholarly literature on the subject is rife with different arguments, opinions, and conclusions. However, this analysis will demonstrate that there is, in fact, a clear correlation between exposure to electro-magnetic fields (EMFs), extremely low frequencies (ELFs), and an array of potentially deleterious biological responses and health outcomes.

Findings
Individuals living in developed nations rely substantially on electricity and electrically-powered devices in the course of carrying out most of their daily responsibilities and activities (Feychting, Ahlbom, and Kheifets 145). As the rate of technological advancement increases, it is likely that the individual consumption of and exposure to electricity, and the electromagnetic field that is created when electricity is accessed, will only continue to rise. In addition, the current trend in personal devices involves extended, close-range access to an array of implements that employ both high and low frequencies, further compounding the potential for deleterious health outcomes.

Although electromagnetic fields exist in nature, natural fields have not been associated in the literature with any deleterious health outcomes or biological responses. This is due to the fact that naturally-occurring electromagnetic fields are much less intense and concentrated than those that are man-made (Beale 275). The first indication that there may be deleterious biological responses and health risks associated with high rates of exposure to electromagnetic fields was reportedly identified by World War II-era military clinicians. However, it is only since the late 1970s that the scientific community has begun to evaluate the potential correlation between these two variables (Beale 274).

Although there are many different sources of EMF and ELF exposure in industrialized nations, the most prevalent and visible of these sources are the structures and sites that are dedicated to the conveyance of electricity. As such, the first generation of studies that attempted to assess the potentially deleterious health outcomes of EMF/ELF exposure focused substantially on physical structures, such as power lines and power stations (Feychting, Ahlbom, and Kheifets 175.

In recent years, more research attention has come to be focused upon the impact of personal devices that generate EMF and/or ELF exposures when in use. This area of research interest has increased sharply as the rise of mobile phones has undergone exponential growth in recent years. In addition, the potential impact of contact with EMFs/ELFs generated by home appliances has also been evaluated (Behrens, Terschüren, Kaune, and Hoffmann 144; Kundi, Mild, Hardell, and Mattsson 353).

In addition, an array of other biological effects have been identified in studies that were undertaken as individual or small-group case analyses, and as such, cannot be taken to conclusively prove the existence of a correlation between environmental variables and health outcomes because of the excessively small sample size.

Another area of research that has garnered attention from researchers is assessing the risk factors, health, and epidemiological patterns exhibited by workers whose occupational responsibilities entail close contact with and/or exposure to EMFs or ELFs. In the former Soviet Union, reports of occupationally-vulnerable workers displaying a complex of related symptoms was one of the initial indications that negative health outcomes could be consistently linked with a pattern of EMF exposures (Feychting, Ahlbom, and Kheifets 146).

Another risk factor that has defined recent research assessing the health outcomes of EMF/ELF exposure has focused upon individuals and families whose primary residences are in close proximity to sites that have been identified as sources of electromagnetic fields (Bonhomme-Faivre, Marion, Forestier, Santini, and Auclair 713). Indeed, several of the key studies that initiated this field of research, including Nancy Wertheimer’s germinal 1979 investigation, focused primarily upon assessing the impact of the risk factor of residential proximity to EMFs and ELFs (Feychting, Ahlbom, and Kheifets 168).

Wertheimer’s analysis indicated that there was a strong correlation between proximity to elevated levels of EMFs and negative health outcomes, including, specifically, an array of relatively rare childhood cancers that were observed to occur at a much higher rate than was typical among the general population (263). However, Wertheimer stopped short of definitively making the claim that a causal correlation existed between high levels of EMF exposure and childhood cancer.

This demurral, though understandable in the context of the preliminary nature of the data uncovered by Wertheimer and her team, proved to set an adverse precedent in the field of EMF/ELF research. Over the course of the next several decades, virtually every investigator researching this correlation would elect to preface his or her findings with similar qualifications, regardless of the strength or statistical significance of the relationships that they uncovered in the course of the study. Indeed, the consistency with which these caveats were appended to the conclusions of studies in the field prompted many researchers to begin to refer to this rhetorical positioning as an obvious, but unfortunately necessary, cliché.

The source of this somewhat uncharacteristic refusal to commit to a consensus regarding the existence of a statistically significant correlation between exposure to EMFs/ELFs and potentially deleterious health outcomes is debatable. However, it is significant to note that the extent of the debate in other countries has not been as contentious and prolonged as it has been in the United States. Indeed, a number of prominent health organizations, including the World Health Organization (WHO), have officially classified EMFs as potentially carcinogenic (Vecchia 271). However, the process of determination for ELFs has not yet been completed in a number of international bodies, and related investigation remains ongoing.

Specifically, the reluctance of the federal government of the United States to make any sort of conclusive determination as to the safety, or lack thereof, of EMFs and ELFs has proven to be extremely troubling to many public health experts and advocacy organizations. While it would be irresponsible for the government to make a premature determination on this matter, based on the clear pattern of findings attained over nearly thirty years of research, at least a tentative determination is clearly merited at this juncture (Beale 282; Von Winterfeldt, Eppel, Adams, Neutra, and DelPizzo 1490).

Critics of the federal government’s historical pattern of inaction on this issue have suggested that in the unique market climate of the United States, commercial industries often exert a substantial degree of influence over government regulatory processes. As evidence for this claim, critics have pointed to the quite divergent outcomes in EMF safety determination investigations that have been attained in several European nations, in national climates in which corporate actions and lobbying campaigns are more stringently regulated (Vecchia 271).

The claim that the federal government of the United States has been unduly hesitant on the matter of investigating and regulating the health and safety impacts of EMFs and ELFs is bolstered by the unusual chain of events that transpired in the late 1980s and early 1990s. First, a report that was presented at the request of the Congressional Office of Technology Assessment in 1989 came to the conclusion that biological effects were directly related to electromagnetic fields. This report recommended that the general public be advised to practice prudent avoidance of EMF sources (Sibbison 749).

Then, in 1990, a report entitled “The Evaluation of the Potential Carcinogenicity of Electromagnetic Fields” was released by the Environmental Protection Agency. The preliminary conclusion of this report was that EMFs were directly related to a number of biological effects, and that EMFs were a potential human carcinogen (Sibbison 749).

However, this report was never officially released as representing the determination of the federal government. Instead, it was released in draft form, and then withdrawn when this determination was met with dismay from corporate interests and dissenting researchers, many of whom were funded by the industry (Sibbison 749).

Clearly, it can be acknowledged that the body of research literature pertaining to the biological effects and potentially deleterious health outcomes associated with exposure to ELFs and EMFs is divisive, contentious, and controversial. In the modern context, electricity is a commodity that is surpassed in value by only a few other goods (Beale 274). Any research finding that could serve to limit, regulate, or otherwise alter the current system of electricity delivery and access could have far-reaching economic, political, and social consequences.

Furthermore, some scientists have expressed discomfort with the nature of the research that suggests a causal correlation between exposure to EMFs/ELFs and negative health outcomes. In particular, dissenters have singled out the heavy reliance upon epidemiological evidence that characterized many of the early studies on the topic as being problematic (Sheikh 60).

However, while these shortcomings and deficiencies are to be expected within any relatively new area of research, it is excessive to insist that as a result, the entire body of EMF exposure research is somehow inherently flawed. By the same token, it is also unrealistic to claim that because there is an inevitable number of minute categorical, methodological, and operational points of divergence in the studies that have investigated the biological effects and potentially deleterious health outcomes of ELF/EMF exposure, the entire body of research can be dismissed as “inconsistent” or “inconclusive” (Sheikh 61).

When the majority of the studies that pertain to this subject are examined both individually and collectively, the existence of a significant number of similarities and points of comparison is revealed. While differences in terminology, analytical approaches, and operational definitions may serve to separate and render distinct some of the research in this broad category, the case that emerges from a concise synthesis of similarities compellingly posits the existence of an unambiguous connection between exposure to electromagnetic fields, a number of biological effects, and an array of potentially deleterious health outcomes.

Summary
The current study sought to assess the biological effects and the potentially deleterious health outcomes associated with exposure to electromagnetic fields. By conducting a comprehensive review of the published scholarly literature, a synthesis of the findings linking EMF/ELF exposure to an array of biological effects and negative health outcomes was compiled. Furthermore, the source, nature, and implications of the scholarly and governmental dispute surrounding this issue were analyzed.

Recommendations
Further research on this subject is urgently needed. However, in order to ensure its generalizability and validity, future research should include both laboratory experimentation as well as research focusing on the short and long term effects on biological systems using epidemiological data.

It is recommended that leading bodies of scholars and researchers working in fields that commonly study EMF/ELF exposure collaborate to develop a standardized terminology and methodological approach that will help to contravene claims of inconsistency in the research.

It is further recommended that American and international scholars, public health advocates, as well as the general public become proactive in the evaluation and integration of new scientific inventions that have been scientifically proven effective in eliminating the negative health outcome of most ELF/EMF exposure. Scientific research has identified a technology (Advanced Tachyon Technologies) that solves the health issues identified with most exposure to ELF/EMF requires further studies.

It is further recommended that American and international scholars, as well as public health advocates, endorse further investigation, rigorous scrutiny, and strict oversight on the part of the United States federal government with regard to protecting the public’s health and safety when encountering electromagnetic fields.

Sheikh, Kazim. “Exposure to Electromagnetic Fields and the Risk of Leukemia.” Archives of Environmental Health 41.1 (January 1986): 56-63.