In itself, Tachyon is not a frequency; however, it contains the potential of all frequencies. This is important to understand because of the confusion surrounding the various frequency-energy therapies being used by some holistic healers.
Once it is understood that Tachyon - being the first particle of formless Zero-Point Energy - is the source of all frequencies, it is easy to place Tachyon in the energetic spectrum.

The Flow of Existence:
Tachyon is the Form of the Formless Zero-Point Energy

The energetic theory has been applauded as a bridge explaining the relationship between the beyond-light-speed possibilities and our slower-than-light world.  It merges science and spirituality and blends our awareness of the quantum potential that exists and the reality we perceive.

In quantum physics, the energy that fills the cosmos is called "Zero-Point Energy." It is formless, moves beyond light speed, and is omnipresent. Held within Zero-Point Energy is the potential of all existence and the intelligence to create perfect form.

Once the Energetic Continuum is understood, we are then able to understand the effects of blockages within the flow of energy through the continuum. With this understanding, we then have the ability to realign ourselves with our natural state of harmony and health. By opening ourselves to the flow of the Energetic Continuum as it travels from Zero-Point Energy through Tachyon to the SOEFs, our being is energized and restructured so that we may create neg-entropy or anti-aging.

Tachyon, because it is the source particle of energy that organizes and energizes the SOEFs (SOEF explained), provides the potential to restore harmonious healing frequencies. Creating a neg-entropy effect, Tachyon organizes that which is disorganized. It realigns and restores the SOEFs to their natural state of order and balance, thus creating a state of well-being or health.

For example, if someone has experienced an emotional stress and continues to go through life without any release or balance, a blockage of energy will occur in the emotional body of that human being. This blockage in the natural flow of energy (Energetic Continuum) in turn will cause an energy deficiency between the emotional body and a part of the physical body.

Let’s say the blockage is causing a deficiency in the lower lumbar area of the back. This person may begin to experience lower back pain. If the stress continues, the situation may escalate into severe back pain, ruptured disk problems, or even degenerative disk disease. Anytime part of the Energetic Continuum is blocked, the organ or system that is left in a deficient energetic state will ultimately succumb to one of this world’s many degenerative diseases.

When focused into the specific deficient area, Tachyon reorganizes and energizes the disrupted SOEFs, therefore allowing the blockage(s) to dissipate. The body is able to reconnect to its Energetic Continuum when the blockage is removed. Connecting to the Energetic Continuum means increasing the flow of energy from life’s source - Zero-Point Energy. As co-creators in our state of health, once we increase the flow of Tachyon Energy, we can then be relieved of the emotional stress.

In itself, Tachyon is not a frequency; however, it contains the potential of all frequencies. This is important to understand because of the confusion surrounding the various frequency-energy therapies being used by some holistic healers. Once it is understood that Tachyon - being the first particle of formless Zero-Point Energy - is the source of all frequencies, it is easy to place Tachyon in the energetic spectrum. All frequencies, such as photon, orgone or light waves, can become coherent and balanced when Tachyon is used to energize the SOEFs. Through the Energetic Continuum, Tachyon interacts with the SOEFs, which absorb the potential needed for energizing them and strengthening their frequencies. The Energetic Continuum applies to everything we know of in our existence. 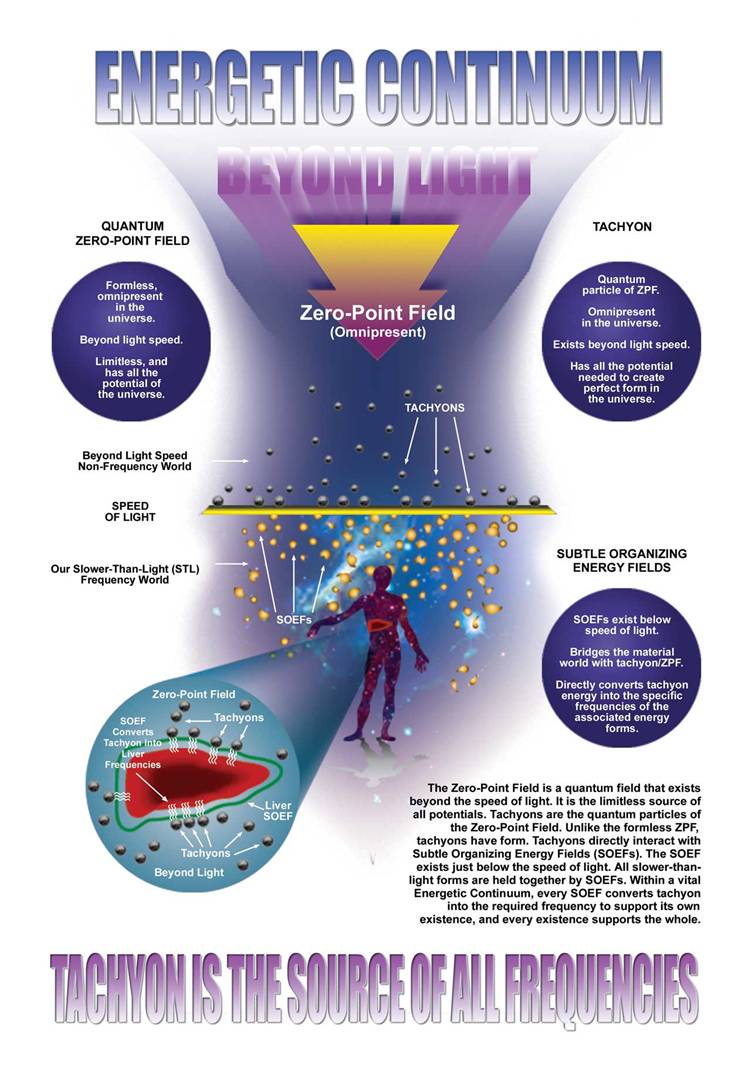