A Taste for Tachyons

Tachyons are little known subatomic particles that exist beyond the speed of light and have been largely marginalized to the wacky fringe of science. Amy Louise Ralston, acupuncturist and health professional, warmed to this brave new world as she discovered its impressive healing potentialities.

The gap between science and spirituality is closing. With the contributions of David Wagner and the University of Integrated Science, California (UISCA), the gap is closing very fast, indeed! An excerpt from the UISCA Mission Statement makes clear their vision: Our institute and practices support integration of body, mind, and spirit. Its uniqueness resides in merging these "intangibles" with science---in particular, applied physics and medicine. At the same time that we promote an individual’s full ecstatic potential, we use products developed from the Tachyonization process invented and developed by David Wagner, who devotes his life to blending ancient spiritual wisdom and technology.

David’s motivation is clear: "Tachyon Energy, from my perspective, is the law of existence; we can all master it. To give this to a corporate structure doesn’t work for my heart. I want to give this to people. It is people who are able to heal people. Sure, retiring on a desert island sounds good, but I could do that now. Our problem on this earth isn’t a lack of energy; it is a lack of consciousness." 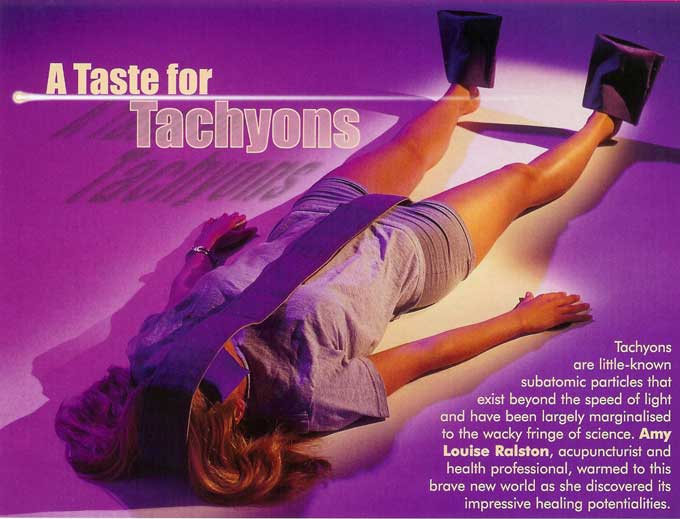 I volunteered to interview David Wagner while he was presenting the Tachyon Holistic Wellness Training course at Croydon Hall near Minehead in Somerset. His enthusiastic facilitators invited me to attend the course rather than doing a standard interview. After listening to David speaks the first morning, I was keen to accept the invitation. The information that I was hearing was filling gaps in my knowledge and answering many half-formed and unspoken questions that had been floating around in my head for years. I felt a renewal of my excitement in exploring deeply the subject of energy medicine and spiritual potential in a way that I hadn’t felt for some time.

In the beginning Spirituality and Science were present in equal measure from the beginning of David’s life. His grandparents were missionaries who walked their talk. Their lives were free from doctrines and completely focused on God. David spent 4 months a year living with them, and exploring and developing his own inner life with God. He was also deeply interested in science from the start, and built his first electric generator at the age of eight. David progressed successfully from higher education to working in the computer industry, where he specialized in computer diagnostics equipment and computer-assisted infrared technology. He soon developed specialist talents in the area of satellite communications, and became a developer and inventor for a Fortune 500 company. Here he invented the W.E.6 and W.E.7 electromagnetic-field processing units. The W.E.7 was considered to be the best neutralizer of EMFs (electromagnetic fields) before he perfected the Tachyonization process.

At the age of 28, David was unexpectedly taken deeper into his life journey. A filing cabinet fell on him at work, and ruptured 3 lumbar discs. His disability was so severe that most doctors said that there was nothing that could be done for him. When he was finally convinced by an orthopedic surgeon to be operated on, the worst happened. The nerves in his leg were damaged, and he was left in more severe pain than before. After another MRI scan, he was declared totally and permanent disabled. Nothing relieved the excruciating pain, and life became very, very difficult.

Some time later, during a state of deep mediation, David asked profound questions about his life’s purpose. It was at this moment that he received the wisdom that was to become the Tachyonization process. He then proceeded to construct the first Tachyon machine and began experimenting with the first Tachyonized materials. He placed them on his back (following his spiritual guidance!) and noticed that he was experiencing a lessening of pain over time. Four months on, his back was significantly improved, and six months on he began to see the potential of Tachyonized materials for global healing.

Leading scientists have been researching faster-than-light energy for decades. The first scientist to achieve recognition for his work in this area was Nikola Tesla, who in 1931 conducted successful, documented tests on an engine that powered a car with no visible energy source. In 1966 two scientists, Gerald Feinberg and George Sudershan, both independent of one another, defined faster-than-light energy as Tachyons, from the Greek root for high velocity. In his book Revolution in Technology, Medicine and Society Dr. Hans Nieper states that the existence of Tachyon Energy has been proven beyond doubt since 1975.

The scientific theory of Tachyons is breathtakingly beautiful, as well as having an edge of heresy. Everything that exists below the speed of light, that is to say between 0-186,000 miles per second, exists in the world of frequency or the world as we experience it. Tachyons are particles that exist at the interface between the world of frequency and Zero-Point Energy. Zero-Point Energy exists in infinite quantity, is formless, and yet contains everything needed to create perfect form. Zero-Point Energy condenses down through Tachyons; Tachyons then step the Zero-Point Energy down into all frequencies which are then taken up as needed by the Subtle Organizing Energy Fields (SOEFs) which order our existence. SOEFs both create and energize the template form of all living systems. One could say that our physical forms are a precipitation of Zero-Point Energy that is fed to our SOEFs through Tachyons. The theory is that Tachyons are the source of all frequencies.

When we are in ill health, our energy fields lose coherency and therefore the ability to function. If this state goes on long enough, we go into a state of entropy, or ageing. Air pollution, pesticides in our food, and chronic emotional states are examples of factors contributing to entropy. Examples of negative entropic, or regenerative, substances include clean air, organic food, and Tachyonized materials. These things actually contribute to the regeneration of the body’s SOEFs. The negative entropic effect creates order out of chaos. The only problem with this is that this violates the second law of thermodynamics!

The second law of thermodynamics states that in a closed system, entropy increases over time as organized forms decay into greater states of chaos. Entropy happens at the point of overwhelm, when the system’s capacity for adaptation to stress becomes exhausted. This is known as the bifurcation point. However, human beings do not fit the definition of a closed system, and they can regenerate or decay depending on the circumstances. When a negative entropic energy source is introduced at or near the time of bifurcation in the human body, it supports the body to regenerate instead of decay. Moreover, if it can be proven that there are particles that exist prior to the speed of light, then, according to David Wagner, this lends credence to the theory that any movement beyond the speed of light would be beyond time. Of course, that implies that forward and backward time movement could therefore be possible!

Tachyonized materials, when placed on or near the body, provide the bridge between the infinite Zero-Point Energy source and us. The use of such material in the management of health shows real promise. Most medicine is frequency based. Drugs, homeopathy, magnets, Radionics, crystal therapy, flower essences, Reiki (a symbol is a frequency), Orgone Therapy, to name but a few, are all frequency based. Some very important work is being done with these approaches, but the therapists who administer these treatments have to be very skilled. Frequencies can destroy as well as heal. Frequencies can stop SOEFs from depleting, but they cannot recharge them. As a healthcare professional I can see that the perfect balance to the range of healthcare options available seems to be the non-frequency based approach.

How does it work?

Scientists have set out to prove the Tachyon Theory, but many attempts have failed, as they were trying to solve the wrong problem. They were trying to prove that a Tachyonized material acted as a Tachyon antenna, and that the energy flowing out of it was Tachyons.
However, how can this be proven with current measuring tools, which are frequency based?
The solution was akin to the gravity question, as we can’t measure gravity without the effect. Therefore, we can measure the negative entropic effects that Tachyonized materials have on negative entropy, and for that we don’t need a Ph.D. We only need to see how the technology affects us individually.

The process is centered on restructuring natural materials at a sub-molecular level. The Tachyonization machine takes 14 days to "open up a window" into the point of singularity that exists just prior to the frequency plane. The natural molecular structure of whatever natural material is put into the machine realigns to become a permanent Tachyon Energy antenna. Further, as stated in the book "Tachyon Energy: A New Paradigm in Holistic Healing", by David Wagner and Gabriel Cousens, M.D.,"
Since the status of the invention is proprietary, we cannot divulge the details of the Tachyonization process. We can, however, mention what it is not. The Tachyonization process is not a frequency, spin manipulation, or transfer. It is not a high frequency or coil technology. It does not use magnets or sounds. It does not use sacred geometry to inform products. It is not a photon-based technology. It is not an SE-5 or other forms of radionic-based technology. It does not require prayer or meditation. The technology does not use crystals or Orgone technologies. It is absolutely not operator-sensitive.

As any natural material can be Tachyonized, the variations of these healing tools and their uses are seemingly endless. Over 500 different Tachyon tools have been invented, such as eye masks, ear plugs, sports wraps, shoe inserts, and Tachyon pendants, with many created as a direct response to a unique healing conundrum. One of the latest developments uses Tachyonized herbs to deliver Tachyon Energy to specific organs, say, Tachyonized dandelion root for the liver.

Many scientists are currently working to bring free energy technology to transport, housing, and industry applications, to name a few. Although this is obviously laudable, the bigger picture demands that we bring free energy to consciousness; the more awake we are, the healthier in body and spirit, the higher choices we make, and the more deeply we can bring healing to our planet. For David Wagner life supporting technologies would be a logical consequence of this awakening.

Quotes from those I interviewed, experiencing the Tachyonized Cocoon for the first time:
"The thing about God energy, it’s all the same. So you have to come down here to experience anything different. God energy is familiar. Immediately you experience it, you know what it is, what you’ve always known. It is calm, it’s harmonious, and it’s all the things it’s supposed to be. That is what I experienced in the Tachyon cocoon." RB from Stroud

"The feeling for me was very much being enveloped in, it was a solid feeling. The energy that was coming through or being activated was the same as when I do my healing work. It is a soft trance-like energy---that is what was pulsing in my body. Towards the end of my session in the Cocoon the energy was building very strongly, in a wave. Physically I could feel a kind of balancing going on. Overall, it was like being in a different time/space. I lost sense of time and who was in the room. I liked the fact that it was just me and the Cocoon without anyone else’s energy around me." NW from London