Measuring the biological effects of Tachyonized materials
The prototype of the following study was done in 1992.  It has been duplicated countless times in this form and with the use of many varieties of plants, including both cut and potted.  In these photos below are two rosebuds cut from the same vine.

We conclude from this that the Tachyonized water continually energized Rosebud "B's"  SOEFs. The SOEFs converted the Tachyon energy into the exact frequency needed for the rosebud B to stay balanced and alive. From this we can postulate that Tachyonized materials seem to slow the effects of the aging (positive entropy) process.

In the case of rosebud "A", the effect seem to be partial reversal of the aging process. With the rosebud "B", where Tachyonized materials were used from the beginning, we see an extension of the life process, as the stem grew roots and was planted.
Subsequently the stem developed into a beautiful rose bush. Tachyonized materials have the ability to keep a biological system in balance by promoting vitality and health of the system. 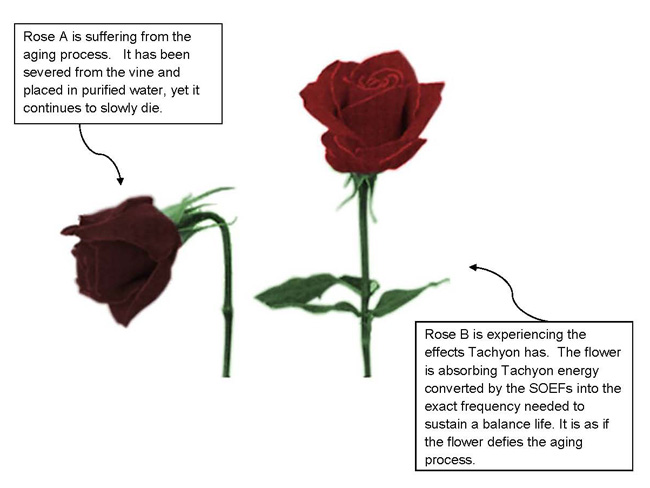